Animals Asia is devoted to ending bear bile farming and improving the welfare of animals across Asia. We promote compassion and respect for all animals and work to bring about long-term change. Founded in 1998, the Animals Asia team has been rescuing bears since 1994. We operate award winning bear rescue sanctuaries in China and Vietnam, and we are the only organisation with a bear sanctuary in China. Our founder and CEO, Jill Robinson MBE, Dr.med.vet. h.c., Hon LLD is widely recognised as the world’s leading authority on the cruel bear bile industry, having campaigned against it since 1993.

It's time to raise your paws for Moon Bears! 🐻

Did you know, in certain parts of the world, Moon bears are poached from the wild as cubs and often brutally separated from their mothers to be kept in tiny cages for painful bile extracted procedures? All these are in the name of traditional medicine.

This New Year, Pawjourr has teamed up with Animals Asia to release an exclusive Pawjourr x Animals Asia CNY Red Packet in order to lend our support and join the global movement of ending bear bile farming.

We're looking for sincere and passionate pet influencers to join us in spreading awareness of bile bears and to encourage others to pledge their support, in order to close the final pages of this cheaper animal exploitation. Every effort and paw counts! 🐾

Selected influencers will receive a set of:

YOU can make a difference in these bears' lives! Support the movement to end bear bile farming now.

You can choose all the products 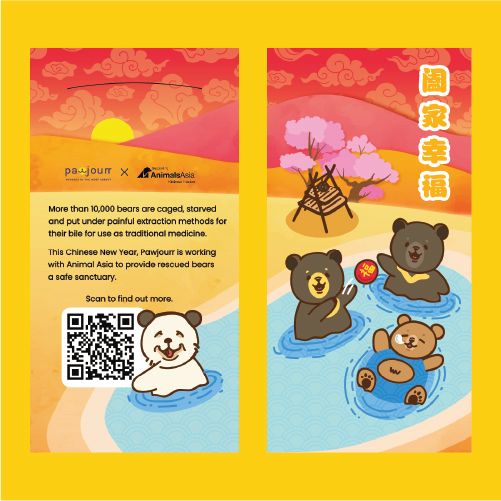 Exclusively created to show our support in Animals Asia movement to end bile farming. These Pawjourr x Animals Asia Red Packet comes in a set of 10.

All influencers are expected to uphold the required deliverables.
You may proceed to share your content on social media within the stipulated deadline